Show all categories Venues Back 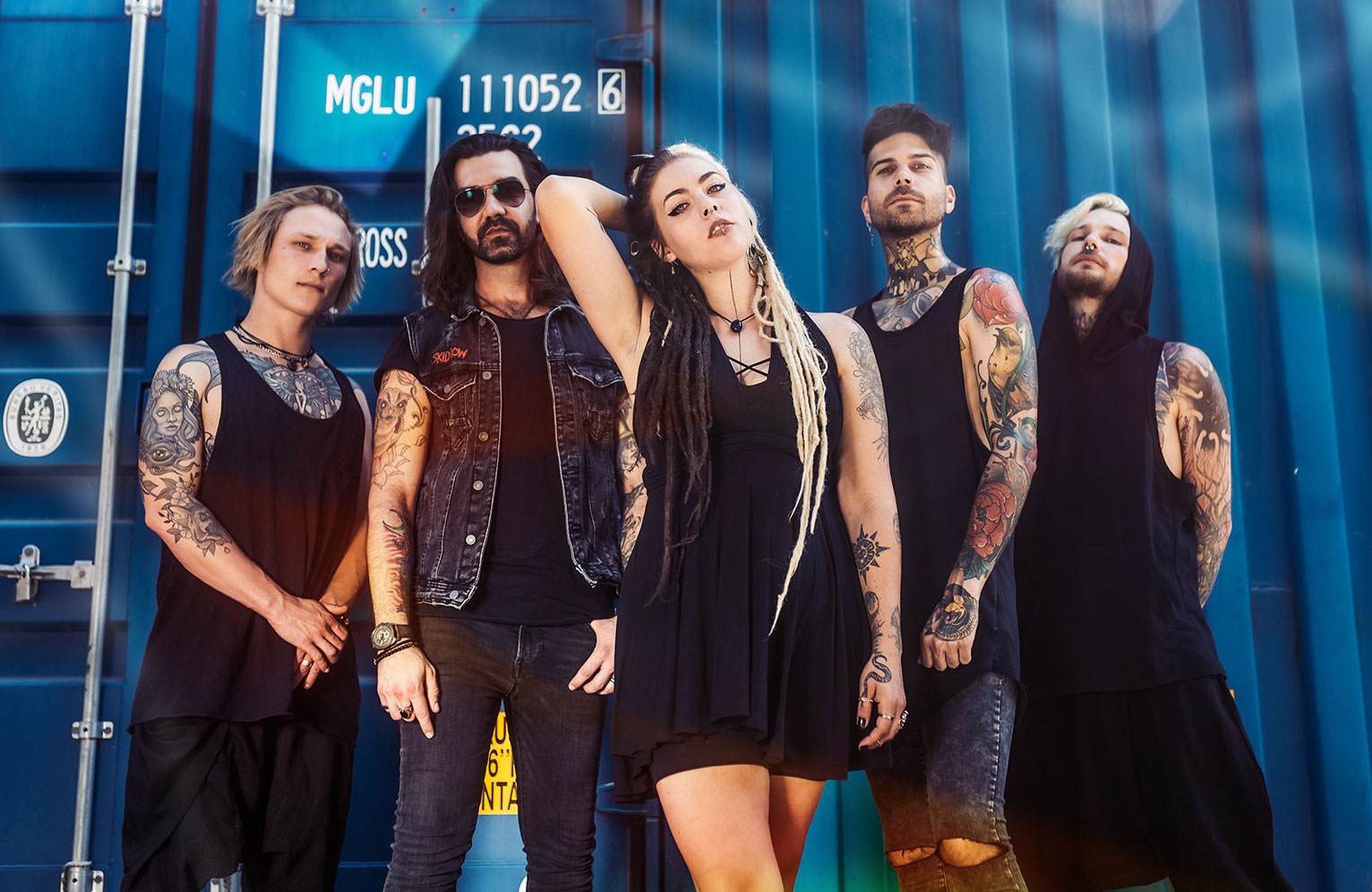 From the depths of their deepest crisis, VENUES emerge victoriously, all guns blazing. When former vocalist Nyves quit the band mid-tour following the release of their pivotal debut »Aspire« (2018), Southern Germany’s modern metal juggernaut was shaken to the bone. Of those remaining, however, nobody wanted to give up believing in a band that for the first time gave a glimpse of its potential after many years of building, maturing, and finding themselves. They struggled on, they were looking for new talent – and they found it, of all places, at a Steel Panther show.

Among the frenzied crowd is VENUES guitarist Constantin Ranis who witnesses a young woman called Lela take to the stage, only to deliver an epic vocal performance back-to-back with hard rock’s most infamous crew, as if she did this daily. Stunned, he records it, and they meet after the show. “I only meant to give him my number for him to send me the video,” Lela recalls of this fateful meeting. She got the video – and became the vocalist for one of Germany’s biggest modern metal hopes almost as a side effect. “Pretty mental,” she laughs.

It is always darkest before the dawn. Mastermind Robin Baumann is also baffled by the whole affair of coincidence, fate, luck or what-not. “Already halfway into our very first rehearsal together we all instantly clicked.” He breathes a sigh of relief. “To us, Lela truly is an upgrade.” Since 2014, he has given his all, his heart and his soul for this band. Robin continues: “And it is only our current line-up that makes me feel that right now, everything fits just perfectly. We’re all burning for the same thing, we want the same, think the same. It took a while but it was all worth it.”

Robin’s sentiment is throbbing from every single note, every single riff, every single chord of »Solace«. Melody and punch-drunk heaviness, metal and alternative rock, zeitgeist and authenticity, barbed choruses and unleashed creativity: With their soaring sophomore work, VENUES fulfil every single promise they gave on »Aspire«. It’s this allegiance between a sound that does not shy of international mega acts, precise song writing, huge choruses and duelling vocals of fiercely growling Robin versus triumphant blues powerhouse Lela, that’s lifting the music up to an altogether different level. »Aspire« was a first teaser opening doors for VENUES. »Solace« is a march right into the throne room of the scene, turning the heaviness to 11. “We wanted to be more metal,” Robin summarises with a grin. “There were some pop sensibilities of »Aspire« we wanted to replace with rather the opposite.”

No sooner said than done: Just like for »Aspire«, VENUES once again sought the producing talents of Christoph Wieczorek (Annisokay) who coated their massive sound with a metallic alloy of remarkable precision. Two weeks of August 2020 saw them recording in Eastern Germany’s Halle, allowing them a rare moment of ordinary band life in Covid times. “2020 showed all of us how much the band is helping us keep our sanity,” Robin muses. “Almost the whole band went through minor or medium crises since the release of our debut. Relationships went sour, things were ended and begun. In times like these, our second album was the light at the end of the tunnel. Something we all could look forward to. Our music held our heads above water.” Thus, the title of the record explains itself. »Solace« sings of battles, of darkest days – and of getting back to life by believing in oneself.

It’s a big leap, going from »Aspire« to »Solace«. It’s a logical one, too. VENUES finally come into their own, a close bond, completed by new guitar player Valentin and fuelled by zeitgeist, thirst for action and depth. “Our music helps us coping with pain and problems, It’s our solace,” Lela sketches. “Simply writing songs about anything just doesn’t work.” Brilliant exception to this rule:
‘Whydah Galley’ is probably the world’s first modern metal pirate shanty.

Everybody’s always talking about key tracks. VENUES simply deliver ten strong arguments against this theory. Every single song is a banger; the pressure of »Solace« is so high you get the feeling it will all burst to pieces any minute now. This is especially true for thumping and monumental ‘Rite of Passage’, a very personal song exploring the relationship to one’s father, erupting into a chorus made for arenas. Then there is the razorblade sharp aggression that is ‘Shifting Colours’ or secret band favourite ‘Uncaged Birds’, delivering a future trademark sound with big melodies, smashing vocal performances, feverish riffs and boiling energy. And then there are those weirdly entertaining and totally unique music videos the band has been producing. Hush now, see for yourselves!

Ten songs, ten exorcisms of negative energy, ten lifesavers: Before the last sounds of the gripping finale ‘Mountains’ have faded you have become aware that this could be the new gold standard for contemporary metal, a journeyman’s piece that in a just world will propel VENUES up the ladder. And then, at some point in the future, we can all say: Well, I always knew they’d get that big!